The Greatest of These

My day began on a decidedly sour note when I saw my six-year-old wrestling with a
limb of my azalea bush. By the time I got outside, he'd broken it.

"Can I take this to school today?" he asked.

With a wave of my hand, I sent him on. I turned my back so he wouldn't see the tears gathering
in my eyes. I loved that azalea bush. I touched the broken limb as if to say silently, I'm sorry. 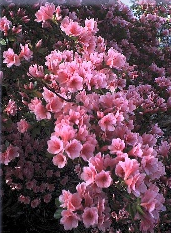 Photo: © JoAnn Reno Wray, 2003
I wished I could have said that to my husband earlier, but I'd been
angry. The washing machine had leaked on my brand-new linoleum.
If he'd just taken the time to fix it the night before instead of playing
checkers with Jonathan. What are his priorities anyway? I wondered.

I was still mopping up the mess when Jonathan walked into the kitchen.
"What's for breakfast, Mom?"

I opened the empty refrigerator. "Not cereal," I said, watching the sides
of his mouth drop. "How about toast and jelly?" I smeared the toast with
jelly and set it in front of him. Why was I so angry? I tossed my husband's
dishes into the sudsy water.
It was days like this that made me want to quit. I just wanted to drive up to
the mountains, hide in a crevice, and never come out.
Somehow I managed to lug the wet clothes to the laundromat. I spent most of the day washing and drying clothes and thinking how love had disappeared from my life. Staring at the graffiti on the walls, I felt as wrung-out as the clothes left in the washers.

As I finished hanging up the last of my husband's shirts, I looked at the clock on the wall. 2:30. I was late. Jonathan's class let out at 2:15. I dumped my clothes in the back seat and hurriedly drove to the school.

I was out of breath by the time I knocked on the teacher's door. I peered in through the glass. With one
finger, she motioned for me to wait. She said something to Jonathan and handed him and two other
children crayons and a sheet of paper.

What now? I thought, as she rustled through the door and took me aside. "I want to talk to you about
Jonathan," she said.

I prepared myself for the worst. Nothing would have surprised me. I had had a fight with my husband
and we weren't speaking, my son had broken a limb off my favorite bush, and now this.

"Did you know Jonathan brought flowers to school today?" she asked.

I nodded, trying to keep the hurt in my eyes from showing. I glanced at my son busily coloring a picture.
His wavy hair was too long and flopped just beneath his brow. He brushed it away with the back of his
hand. His eyes burst with blue as he admired his handiwork.

"Let me tell you about yesterday," the teacher insisted "See that little girl?"

I watched the bright-eyed child laugh and point to a colorful picture taped to the wall. I nodded.

"Well, yesterday she was almost hysterical. Her mother and father are going through a nasty divorce.
She told me she didn’t want to live, she wished she could die. I watched that little girl bury her face in
her hands and say loud enough for the class to hear, 'Nobody loves me.' I did all I could to console her,
but it only seemed to make matters worse."

"I thought you wanted to talk to me about Jonathan," I said.
"I do," she said, touching the sleeve of my blouse. "Today your son walked straight over to that child.
I watched him hand her some pretty pink flowers and whisper, 'I love you.'"

I felt my heart swell with pride for what my son did. I smiled at the teacher, "Thank you," I said, reaching
for Jonathan's hand, "you've made my day."

Later that evening, I began pulling weeds from around my lopsided azalea bush. As my mind wandered
back to the love Jonathan showed the little girl, a biblical verse came to me: "...now these three remain:
faith, hope and love. But the greatest of these is love." My son had put love into practice. But all day I
had only thought of how angry I was with my husband.

I heard the familiar squeak of my husband's truck brakes as he pulled into the drive. I snapped a small
limb bristling with hot pink azaleas off the bush. I felt the seed of love that God planted in my family
beginning to bloom once again in me.

My husband's eyes widened in surprise as I handed him the flowers. "I love you," I said.

Where to Find Us:

But someone will say, "You have faith, and I have works." Show me your faith without your works, and I will show you my faith by my works. -James 2:18 NKJV